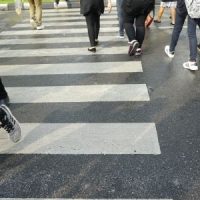 The Lisa Torry Smith Act was enacted in Texas in 2017 after the Missouri City woman was hit by a car in a crosswalk and died. The offending driver was fined $50 at the time but was not criminally charged. Before the law was passed, pedestrians were responsible for making sure they were not struck by a car, and drivers who were not under the influence of controlled substances or alcohol could be cited but not charged as criminals.

The 2017 law says that if a driver causes a pedestrian bodily injury the driver could be charged with a Class A misdemeanor or charged with a state jail felony if death or severe injury were to happen. Lisa’s family was instrumental in the ultimate law passage. There was some question as to whether Texas Governor Abbott would sign the law, but it is thought that letters from the victim’s family encouraged Abbott to sign the Lisa Torry Smith Act into Texas law.

According to the Pedestrian Safety Campaign, pedestrian deaths continue to increase in Texas: In 2021, “there were 5,366 crashes involving pedestrians in (Texas), resulting in 841 deaths, a 15% increase in pedestrian fatalities over the previous year. Another 1,470 people were seriously injured.” To help avoid future wrecks that injure and kill pedestrians, pedestrians need to:

An SUV hit a pedestrian in Dallas on September 18, 2020 at approximately 9:00 p.m. The victim was walking across the street in a designated crosswalk but the “don’t walk” sign was flashing. A westbound driver hit the man and stayed to help the victim. Unfortunately, the victim died soon  after his injuries.

On October 12, 2022, a pedestrian was hit by a vehicle and subsequently pronounced dead. First responders found the victim dead at the scene; the auto driver that hit the victim stayed at the scene to offer assistance.

Why Consult a Personal Injury Attorney?

A good Missouri City personal injury attorney will quickly be able to sort out the facts relevant to your individual case. Police reports are key, and an experienced personal injury attorney can break through bureaucratic red tape to quickly obtain these reports. Evidence needs to be secured, and the Henrietta Ezeoke Law Firm can work with authorities to make sure that crucial evidence is not lost or destroyed. If you are the victim of a pedestrian-auto collision, be sure to contact the office today at 713-234-0030 today. You can also book an initial consultation online.